Bodasu Venkataramana, born in the year 1974 in Feroz Nagar village, Madugula Mandal, Mahabubnagar District, Telangana, started making statues at the age of 15.Till date, he made more than 3000 statues. Numerous exhibitions of sculptures held in Mahabubnagar have had an influence on his interest in sculpture making.He is proficient in sculpting a statue with a picture as a reference. Bodasu is known for making statues out of various metals such as bronze, metal, brass, cement and fiber.

Bodasu’s experience made it a piece of cake for him to create 100 ft. statues The seed for his interest in sculpting figures has been sown at a young age when he used to make small clay figures. He was recognised for his Dr. Ambedkar sculpture in 1991.

He is popular for his prominent statues of Dr. Ambedkar. Bodasu’s works have been established in various states of India such as, Andhra Pradesh, Telangana , Maharashtra, Tamil Nadu, Gujarat, Madhya Pradesh, so and so forth.

Although, the making of Dr. Ambedkar’s statue has been a turning point in Bodasu’s life as a sculptor, he is also highly known for making statues of great leaders, national leaders, freedom fighters and other personal statues requested by the people.

Another statue that brought recognition to Bodasu is the 30ft cement statue of Gautam Buddha placed in Maharashtra. Bodasu contributes his success and accomplishments to his father Mallaya and his teacher G.Yadagiri who have encouraged and supported him in becoming who he is today. Along with them,his wife, Bharati has been a constant support and a corner stone in his professional and personal life making it possible for him to pave a path of his own towards his goals and ambitions.

Bodasu is waiting for an opportunity to sculpt a 200ft figure and has many such goals to carve as a sculptor.Bodasu Venkataramana has established his studio beside Shadnagar NH7 Highway, Telangana where most of the work takes place. 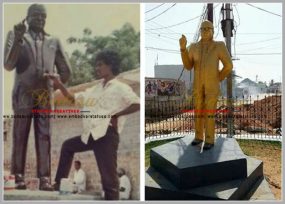 Hello, I am Bodasu Venkataramana, statue creator in Hyderabad, Telangana, India. I had created my first statue in 1991 Amangal(Mahaboobnagar), G.Yadagiri(Teacher) Bodasu Mallaiah(my Father) has inspired me and encouraged me a lot to bulid more than 3500 statues.In 2010 N.Raghuveera Reddy(Ex Minister) has identified my passion in statue making and supported me personally and financially by providing order of making 250 statue.

I always wanted to do something special which would get me name and fame.I am self-taught artist-sculptor have been in fact ”specialising” in Dr.Ambedkar’s statues for many years now. “Dr. Ambedkar’s life fascinated me and I was inspired by his triumph against all odds. I want to convey the same kind of inspiration to the people through my work. My figures of Dr. Ambedkar adorn several public places in the districts of Rangareddy and Mahabubnagar.